ABOUT THE CITY...
Verona – a UNESCO World Heritage city in northern Italy, known for artistic heritage, operas and plays including William Shakespeare’s “Romeo and Juliet.” Roman ruins, medieval vestiges, Venetian and Austrian traces can be seen all across the city, as well as antique palaces, squares, bridges and wonderful churches. In the historical centre, Piazza Bra and the Arena, Piazza Erbe and Piazza dei Signori, Via Cappello and Corso Porta Borsari lead to the Teatro Romano, Ponte Pietra, Castelvecchio, the Ponte Scaligero and the ancient churches of San Fermo and Sant’Anastasia, the Cathedral (Duomo) and San Zeno. Elegant cafés and ancient osterie (typical inns of the Veneto territory), craftsman shops and high couture shops enliven city life all year long. Verona is a man-sized city which fascinates visitors with its elegance and its welcoming atmosphere, in which ancient and modern times meet. 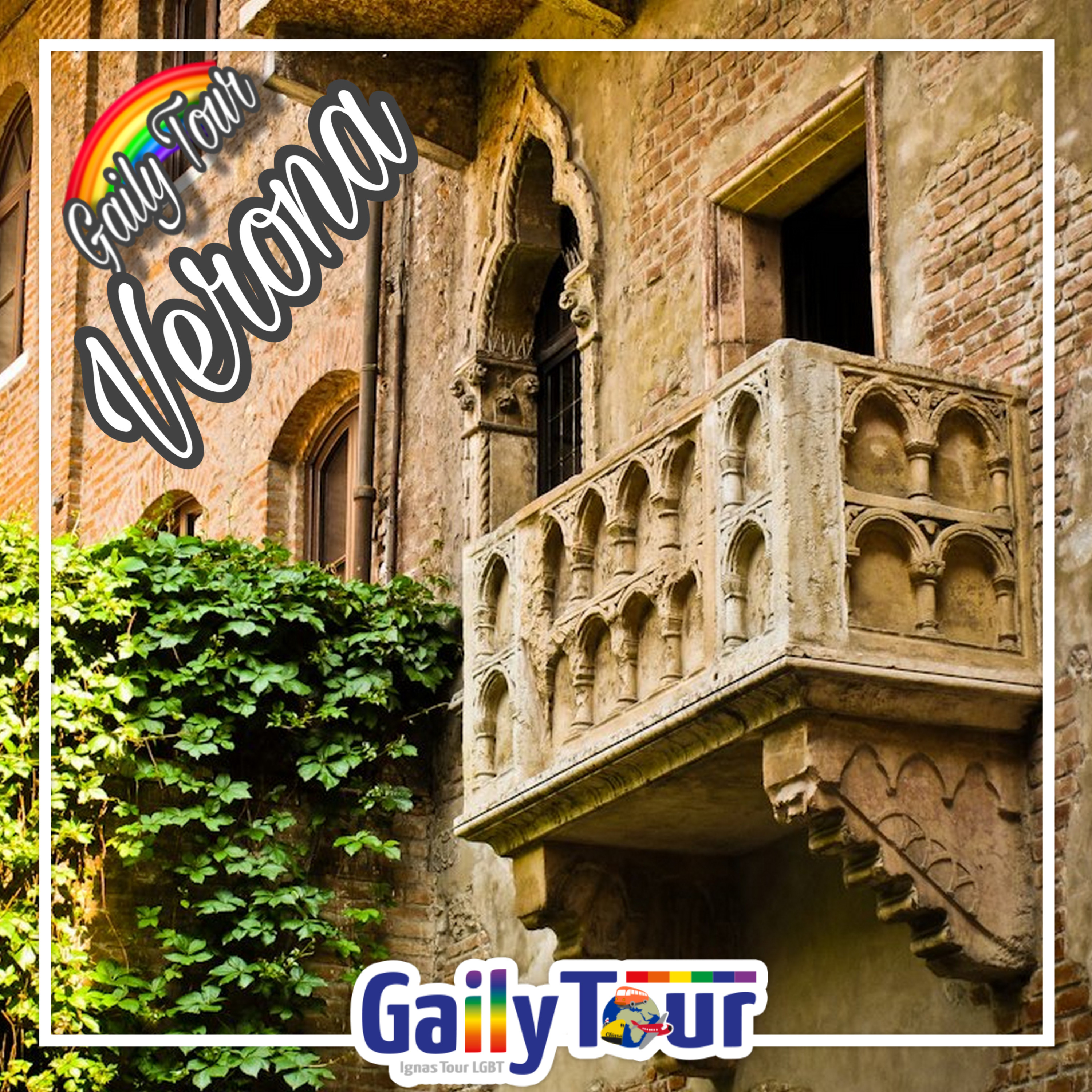 GAILY TOURS in VERONA Get ready for special tours in this amazing city !
Meet our Gay/Lesbian Tour Guide for a private walking tour of Verona and experience one of the most tasty cities in the world.

Verona • Gay Friendly Tour & Shakespeare’s Secrets
Be ready for an extraordinary walking tour in Verona with our Gay/Lesbian Friendly Tour Guide observing its highlights like the Arena and Castelvecchio, a Mediaeval castle with the view of Italy’s second longest river, the Adige. Then continue along Corso Cavour, one of the most elegant streets lined with many noble buildings, and you will come to Porta dei Borsari, a Roman gate where travellers once paid a toll to gain access to the city. Beyond the two arches, the namesake roadway begins, and after a few hundred metres opens up onto one of the most beautiful piazzas of the entire Veneto region: piazza delle Erbe. You will not miss piazza dei Signori, with its statue of Dante Alighieri, as well as numerous other small squares surrounded by splendid buildings. Nearby the imposing Scaligere Arches, which represent an excellent example of a cemetery of honour. At this point, these squares will be left behind to head towards the place that everyone wants to see in Verona: Juliet's Balcony. You will watch and take part in the local superstitious rites by touching the statue's breast and announcing your true love's name from the balcony. During the tour learn more about the tales of Shakespeare's hipotetical bisexuality and the presentation of the Gay Version of Romeo & Giulietto, which made public opinion speak a lot.
Included:
* Gay or Lesbian Tour Guide for City Tour (3 hours)
* Entrance Fee Skip-The-Line – Arena, the Roman Amphitheatre (Closed on Mondays and National Holidays)

Verona by Night • Gay Tour
Enjoy an enlightened Verona and an amazing walking tour through Verona's gay & lesbian bars and clubs to live on your skin the magic atmosphere and LGBT scene of the city. Enjoy your included drink (also alcohol free drink available) and own the night !
Included:
* Gay or Lesbian Tour Guide for Night Tour (2 hours)
* Aperitif in Gay Bar (1 Drink)

GAILY EXCURSIONS from VERONA
Get ready for a special full day Gaily Excursion with us !