ABOUT THE CITY...
Rome is the capital and largest city of Italy. Known as the ‘Eternal City’, Rome is one of the world’s most visited tourist destination. Its historic city centre is a UNESCO World Heritage Site filled with famous landmarks, grand palaces, ancient churches, ruins, statues and fountains. Rome is also recognised as one of the fashion capitals of the world, with a growing nightlife scene. The gay scene in Rome is not yet as ‘out in the open’ as in other European capitals – partly due to the influence of the Catholic Church. However, times are changing and, as in many other European countries, a new generation of gay men has emerged. 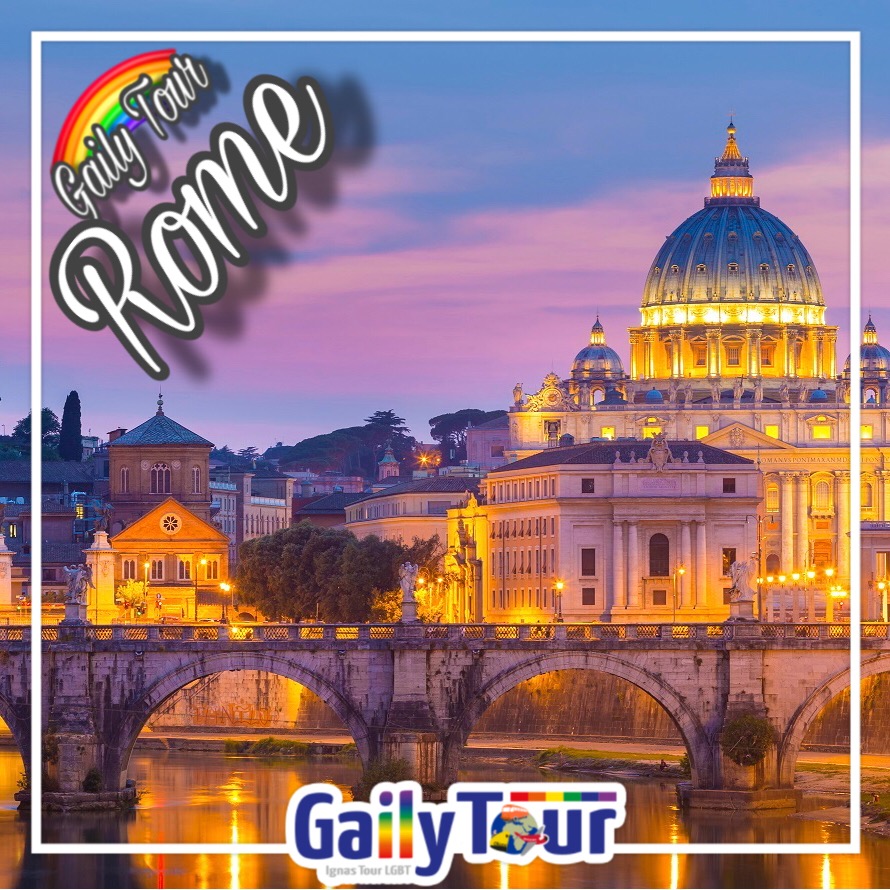 Get ready for special tours in this amazing city !
Meet our Gay/Lesbian Tour Guide for a private walking tour of Rome Gay and experience one of the most eternal cities in the world.

Let’s discover the magic and the glory of the Roman Empire together with our Gay/Lesbian Guide. Start your tour visiting the ancient Rome with the legendary Colosseum (skip-the-line entrance fee included), one of the largest amphitheaters built by Roman Empire with more than 50,000 seat, place of gladiator contests and public events. Afterwards continue to the Roman Forum, one of the most important archaeological sites in the world, and admire the magnificent Arch of Constantine, erected by the Roman Senate to commemorate his leadership over the Eternal City. Then reach the Palatine Hill, the legendary starting point of Rome when in 753 BC the city’s founder, Romulus, chose this hill and set about demarcating the boundaries of a new city around it.
Included:
* Gay or Lesbian Tour Guide for City Tour (3 hours)
* Entrance Fee Skip-The-Line – Colosseum, Roman Forum & Palatine (Closed on National Holidays)

Explore the Baroque Rome with its fabulous fountains and squares together with our Gay/Lesbian Guide. Enjoy the fountain in Piazza di Spagna and the Spanish steps, the renowned Trevi fountain that was the scenario of memorable films like “La dolce vita”, the Pantheon - the “temple of every god”, Piazza di Pietra and Piazza Navona, built on the ruins of the ancient stadium of Domiziano, with the Fountain of the Four Rivers by Bernini, both stages of mythical events. Hidden in the undergrounds of Piazza Navona, you will visit the ruins of the ancient Domitian Stadium (entrance ticket & audioguide). Afterwards you will reach Piazza Montecitorio with the façade of the palace of the Chamber of Deputies, made by Bernini. A short walk will lead you to the Church of Sant’Andrea del Fratte with the bell tower by Borromini and the two statues of angels attributed to Bernini and his school. You will cherish the marvelous curvilinear architecture of Sant’Ivo alla Sapienza which is Borromini masterpiece and has been the universal icon of Rome’s University faculties.
Included:
* Gay or Lesbian Tour Guide for City Tour (3 hours)
* Entrance Ticket – Stadium of Domiziano Underground with Audioguide

Experience an alternative visit of the Vatican Museums and Sixtine Chapel (skip-the-line entrance fee included) learning more from our Gay/Lesbian Tour Guide. During your tour you will discover a superb collection of homoerotic art which has been housed in this place for many years. Inside the Vatican Museums you will find and admire beautiful Greek and Roman sculptures that remind the homosexual iconography (like the Apollo del Belvedere), the magnificent Sixtine Chapel painted by Michelangelo, who was gay and catholic, and you will learn about the secret love stories and scandals occurred within the Papal rooms.
Included:
* Gay or Lesbian Tour Guide for City Tour (3 hours)
* Entrance Fee Skip-The-Line – Vatican Museum & Sixtine Chapel (Closed on Sundays)

Walk with our Fashion experts through the famous fashion streets of Rome walking along Via del Corso, Via dei Condotti, Via del Babuino and Piazza di Spagna, where you can enjoy and experience the real Italian shopping ! Take a look at the windows of Gucci, Prada, Valentino, Giorgio Armani and immediately you'll feel immersed in luxury and exclusivity. Our fashion experts will assist you during your shopping and give you special tips about Italian way of life. Afterwards enjoy a special Italian aperitif in a very exclusive bar.
Included:
* Gay or Lesbian Tour Guide for Shopping Tour (3 hours)
* Aperitif at Rooftop Bar (1 Drink)

Enjoy an enlightened Rome and an amazing walking tour through Rome’s gay & lesbian bars and clubs to live on your skin the magic atmosphere and LGBT scene of the city. Enjoy your included drink (also alcohol free drink available) and own the night !
Included:
* Gay or Lesbian Tour Guide for Night Tour (2 hours)
* Aperitif in Gay Bar (1 Drink)

Get ready for a special full day Gaily Excursion from Rome Gay with us ! 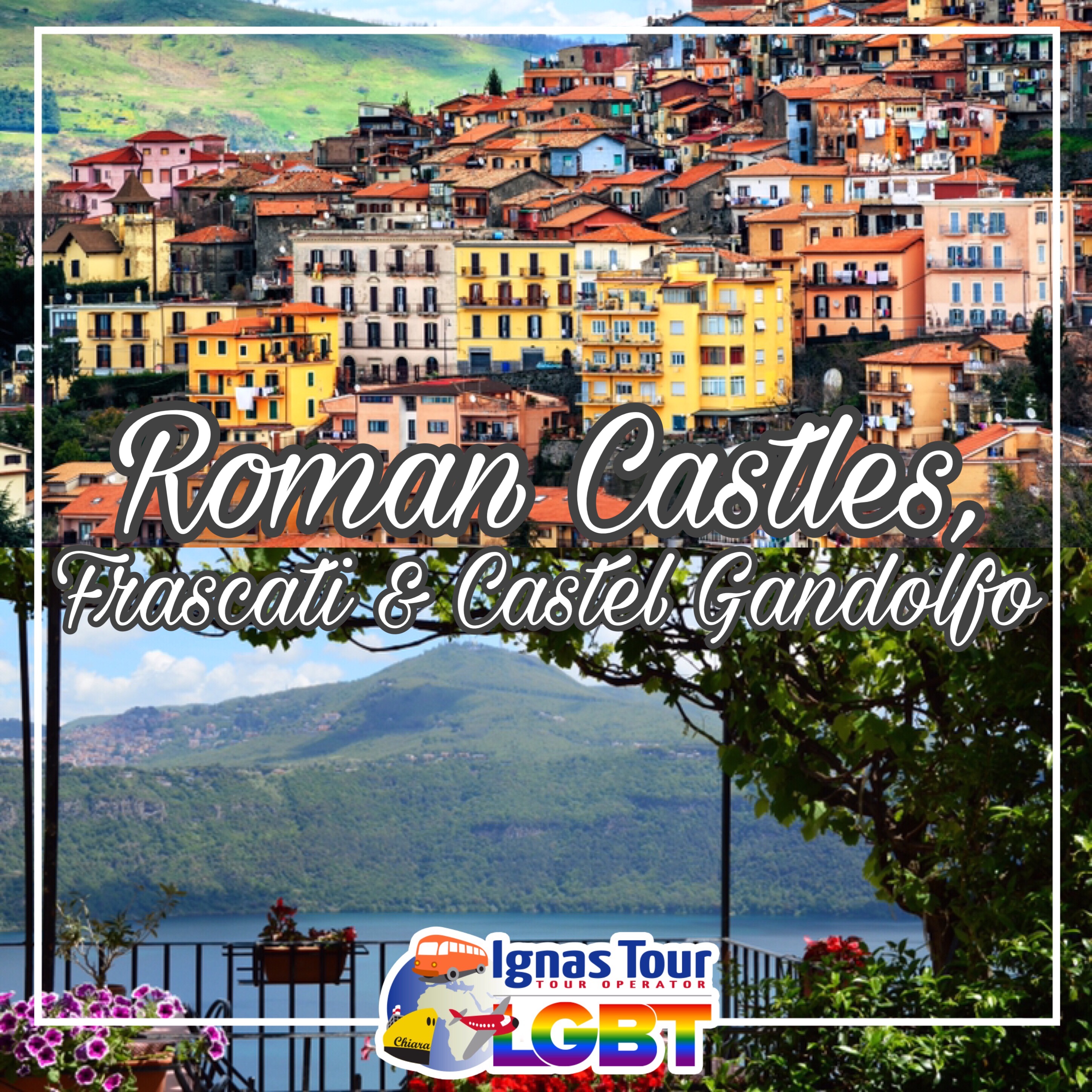 After breakfast meeting with our LGBT Friendly Driver and departure to Castel Gandolfo, driving along the ancient Appian Way. Welcome to the summer residence of the Popes. Stop in the picturesque Piazza della Libertà in Castel Gandolfo, where the solemn Apostolic Palace opens its doors for the first time to the wider public of families. Afterwards continue to Albano, which dominates his Lake, and the city of Ariccia, famous for its large bridge with three arches. Lunch on your own to taste local specialities. After lunch, continue to Rocca di Papa, a medieval town wonderfully situated on the slopes of Monte Cavo, and Grottaferrata, a small and elegant city, whose history is permanently linked to the well known Abbey of Saint Nilus and to the historical fair of medieval times. Finally arrival in Frascati, the most famous town of Castelli Romani, very popular not only for the elegance of Tusculan Villas, but also for the delightful food and wine products. Here take a walk through the narrow streets and delight your tongue with a tasting of local wines (3 wines). Afterwards transfer back to Rome.
Included:
* LGBT Friendly Driver for Gaily Excursion
* AC Minibus or Car for the Excursion
* Local Wine Tasting in Frascati (3 Wines) 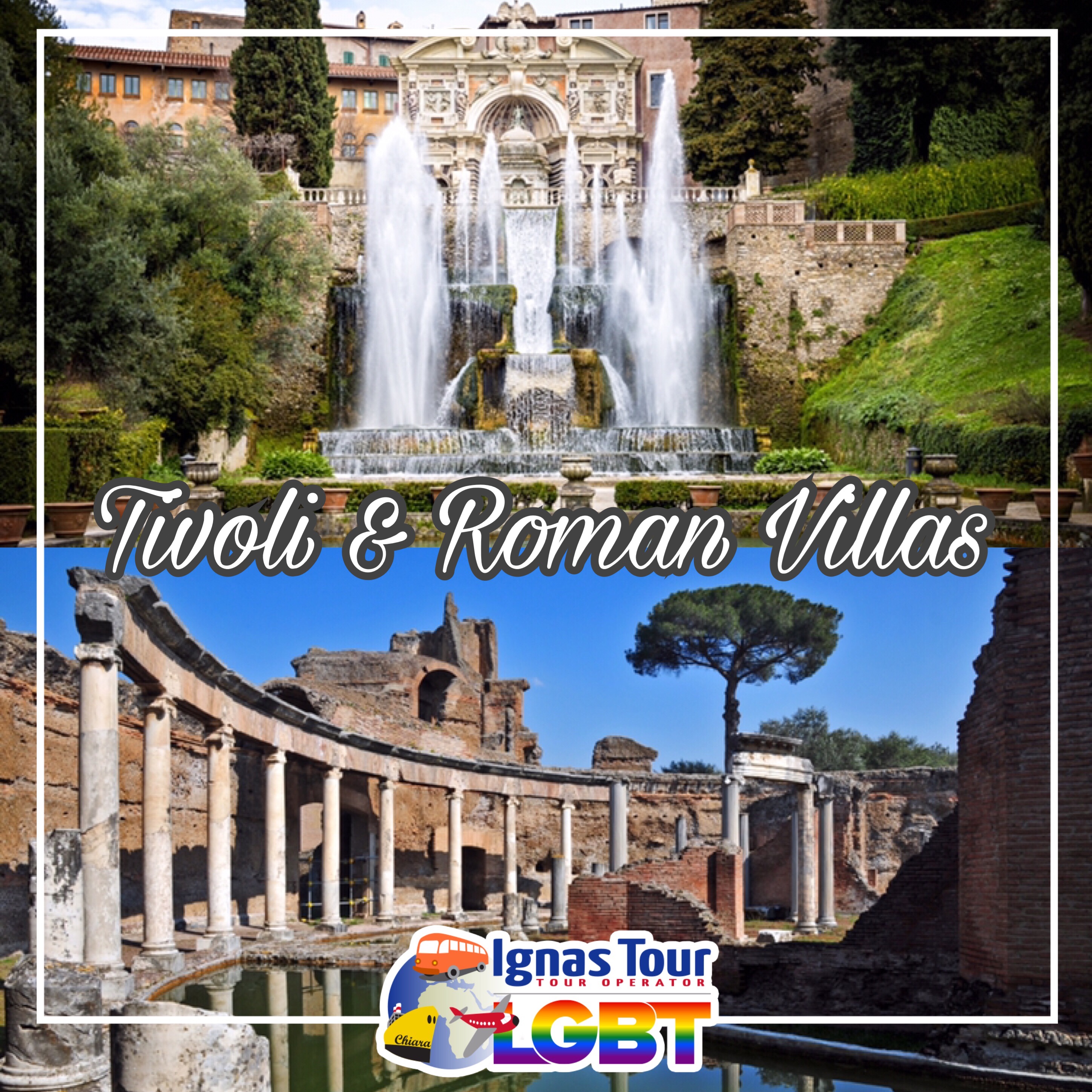 After breakfast meeting with our LGBT Friendly Driver and departure to Tivoli and discover two UNESCO World Heritage Sites, Villa d’Este and Hadrian’s Villa. Visit the Renaissance Villa d'Este was built in the 1550s for Cardinal Ippolito d'Este, the son of Lucretia Borgia. Built over a Benedictine convent, the palace was intended for entertaining and contains lavishly frescoed reception rooms. The main attraction for visitors, however, is the breathtaking garden. Designed to impress the Cardinal's guests, the Villa d'Este's gardens are composed almost exclusively of water features and precious fountains. After lunch on your own, continue with the Villa Adriana, a undescribable place. The Emperor Hadrian conceived a countryside dwelling here that would by normal standards be considered a town. A gigantic complex with underground service passages big enough for vehicles (tantalising glimpses are still visible), the Villa incorporates lakes, fountains, libraries, baths, temples and gardens. The area covered is staggering, and highly confusing even when armed with a map; it's easy to imagine the emperor himself asking for directions. Afterwards transfer back to Rome.
Included:
* LGBT Friendly Driver for Gaily Excursion
* AC Minibus or Car for the Excursion
* Entrance Fee – Villa d’Este
* Entrance Fee – Villa Adriana 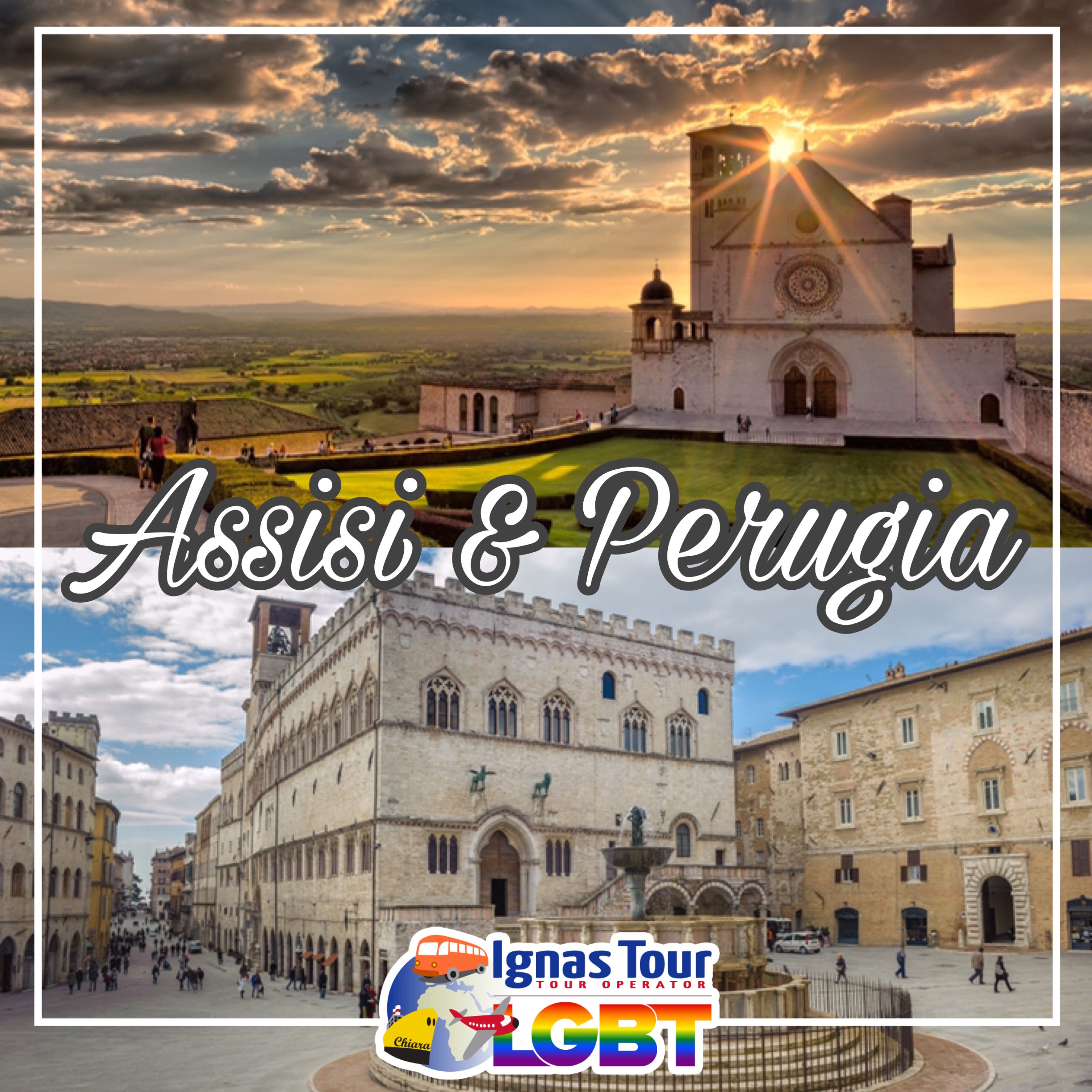 After breakfast meeting with our LGBT Friendly Driver and departure to Assisi. Be ready to visit this small medieval town, located on a hill. Explore this UNESCO World Heritage Site with its Roman ruins, winding medieval streets and sacred shrines. It's also the birthplace of St. Francis of Assisi. Admire the 13th-century San Francesco’s Cathedral, one of the artistic highlights of medieval Europe containing the sacred relics of St. Francis and Giotto's astonishing frescoes (entrance fee included). Lunch on your own to taste local specialities. After lunch, continue to the special city of Perugia, an enchanting hilltop city with a compact historic center that is a rambling maze of medieval streets. It became famous as the “City of Chocolate”, thanks to its ancient tradition. This gloriousness is celebrated with Eurochocolate, a huge autumnal chocolate festival. Admire the monuments of this beautiful city, from the Fontana Maggiore, considered one of the most beautiful fountains in the medieval period, to the Rocca Paolina (Paolina Castle). Once there visit the Perugina Chocolate House, created by Perugina in 2007 in occasion of his hundred year anniversary, offers a route which unifies the prestigious story of the mark with the value of a modern business reality. You will see the Historical Museum, which tells the story of the firm and his profound link with the territory. Don’t miss the opportunity to discover the LGBT aim of the city following the footsteps of many Gay & Lesbian writers like Sandro Penna, famous for its homosexual works. Afterwards transfer back to Rome.
Included:
* LGBT Friendly Driver for Gaily Excursion
* AC Minibus or Car for the Excursion
* Entrance Fee – San Francesco’s Cathedral
* Entrance Fee – Perugina Chocolate House

Supplement Official Guide
€ 210,00 (Rates are Commissionable) to be divided between Participants

Supplement Official Guide
€ 210,00 (Rates are Commissionable) to be divided between Participants