ABOUT THE CITY...
Naples is a wonderful city. A World Heritage city that is full of historical treasures and celebrated for its pasta and pizzas. The historic center, listed by UNESCO as a World Heritage Site, with its narrow alleys and morbid charm. Piazza Bellini, by day a quiet square with cafes to relax from the hustle and bustle in the nearby Via dei Tribunali, at night a popular hangout of young Neapolitans. One of the most important archaeological museums in the world. Stylish small bars in the trendy nightlife area of the Chiaia quarter. The panoramic view of the Bay of Naples and the Vesuvio from Castel Sant'Elmo. 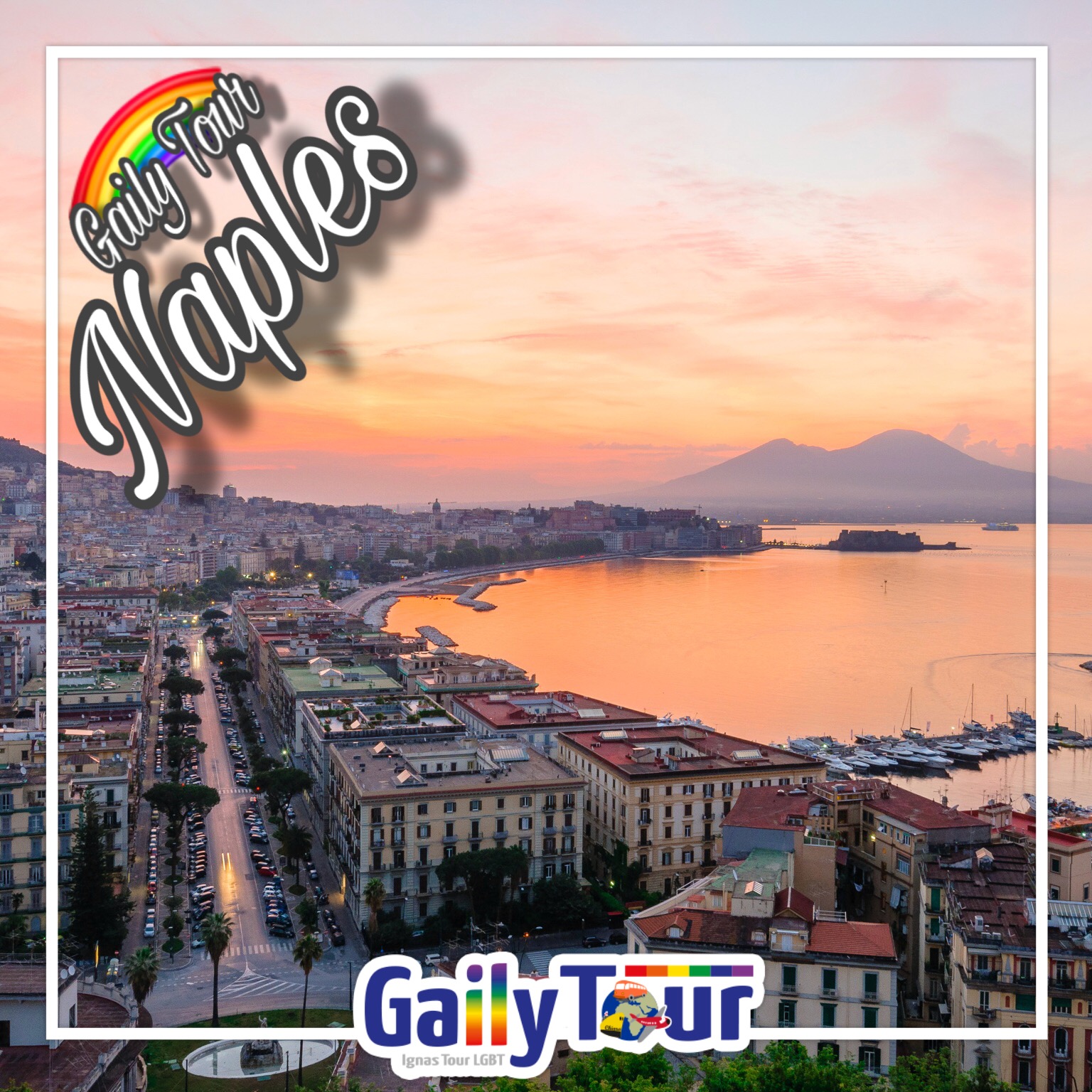 Get ready for special tours in this amazing city !
Meet our Gay/Lesbian Tour Guide for a private walking tour of Naples Gay and experience one of the most tasty cities in the world.

Let’s start your amazing tour of Naples with our Gay/Lesbian Guide, explore the magnificient Plebiscite Square to admire the Royal Palace (ticket entrance included), Umberto I Gallery, San Carlo Theatre and Castel Nuovo, also called Maschio Angioino (view from the outside). Continue your tour to Castel dell’Ovo along Naples Seaside with a special view of Vesuvio Volcano, and take a walk in Borgo Marinari, a rocky little village where – according to the legend – the heartbroken siren Partenope washed ashore after failing to seduce Ulysses with her song. It's also where the Greeks first settled the city in the 7th century BC, calling the island Megaris. After the visit return to the Spanish Quarters and Via Toledo, where your visit will end.
Included:
* Gay or Lesbian Tour Guide for City Tour (3 hours)
* Entrance Fee Skip-The-Line – Royal Palace of Naples (Closed on Wednesday and National Holidays)

Be ready to enjoy a special tour of Naples, with a LGBT point of view. Take a look to the famous Via San Gregorio Armeno, street of the nativity scene makers. Explore Naples city center and the secrets behind many LGBT artists who lived in this city. Visit the Sansevero Chapel Museum in the historic heart of Naples, a jewel of the world’s artistic heritage. Here, baroque creativity, dynastic pride, beauty and mystery blend to create a unique and almost timeless atmosphere. The Sansevero Chapel is one of the most impressive monuments that the human mind has ever conceived. Then continue to the famous Piazza Bellini where your tour will end and you will have free time in this bustling Piazza where you can find a multitude of gay friendly restaurants, cafes, and bars and the heart of the Gay night life of this city.
Included:
* Gay or Lesbian Tour Guide for City Tour (3 hours)
* Entrance Fee - Sansevero Chapel Museum (Closed on Tuesdays except Special Openings)

Enjoy an enlightened Naples and an amazing walking tour through Naples' gay & lesbian bars and clubs to live on your skin the magic atmosphere and LGBT scene of the city. Enjoy your included drink (also alcohol free drink available) and own the night !
Included:
* Gay or Lesbian Tour Guide for Night Tour (2 hours)
* Aperitif in Gay Bar (1 Drink)

Get ready for a special full day Gaily Excursion from Naples Gay with us ! 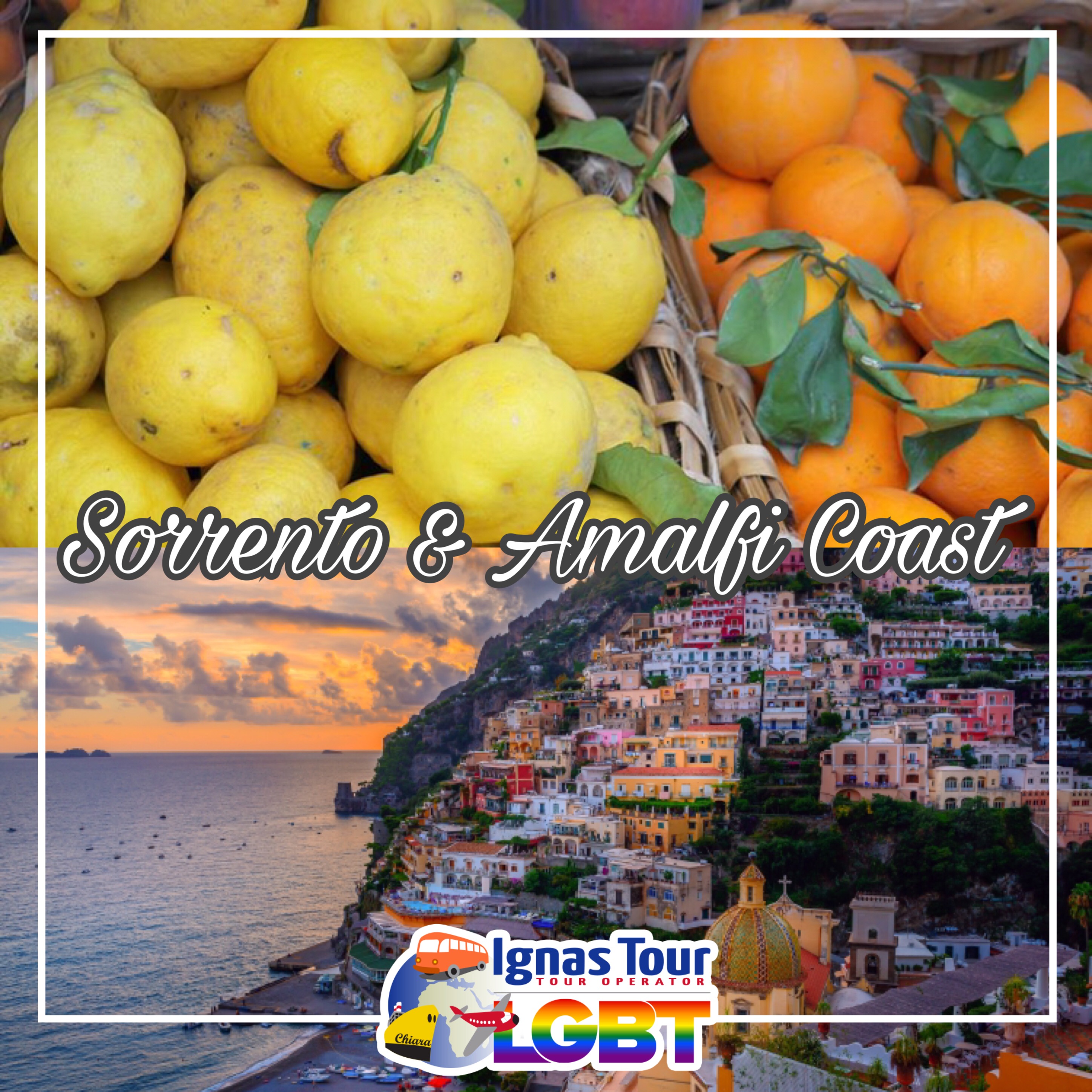 After breakfast meeting with our LGBT Friendly Driver and departure to the worldwide famous Amalfi coast, undoubtedly one of the most spectacular place in the world, with its amazing landscapes and panoramas. You will admire enchanting villages, cliffs terraced with lemon groves, villas and sparkling turquoise seas. First stop in Sorrento and take a walk in this precious village, with its typical narrow streets full of artisanal shops, tasty flavors and beautiful views on the Tyrrhenian Sea. Afterwards you will reach Positano, a pastel resort town perched on the cliffs, renowned for its romance and elegance. Follow the footsteps of many famous writers like Shelley, Goethe, Steinbeck walking through its narrow streets. Lunch on your own to taste typical local products. Then continue to Amalfi, a unique town with the 11th century cathedral of St. Andrew right in the main square. Walk around the city before proceeding to Ravello, considered one of the most romantic and beautiful small towns in southern Italy. Perched on steep, terraced slopes, a place blessed with lush gardens, quiet lanes, sleepy, sun-drenched corners, and a lofty setting its heart lie an 11th-century cathedral and the Villa Rufolo (entrance fee included). Afterwards transfer back to Naples. 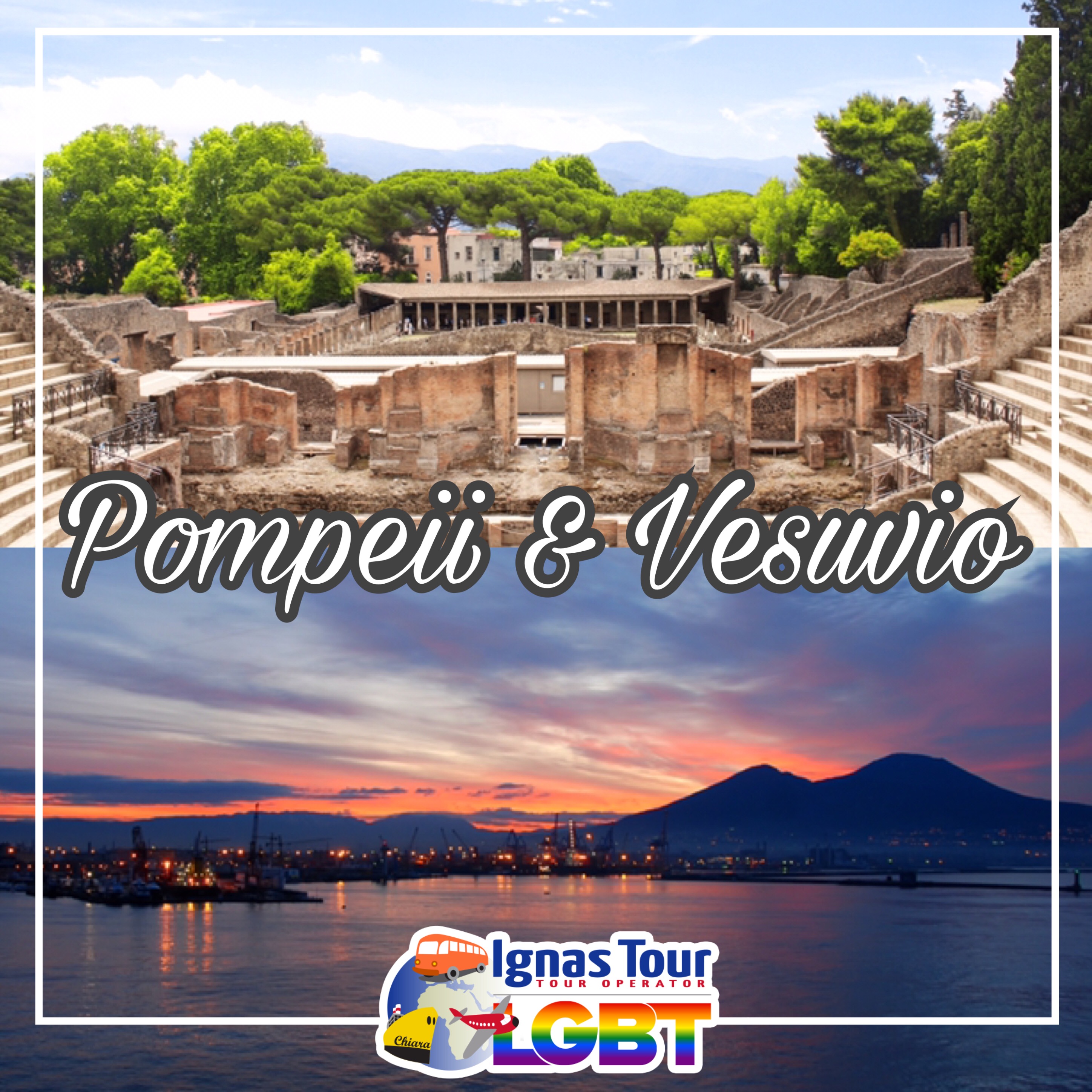 After breakfast meeting with our LGBT Friendly Driver and departure to Pompeii, under the imposing Volcano Vesuvius. Explore the excavations (entrance ticket included) and a city which was frozen in time under volcanic ash. Before Vesuvius’ eruption in 79 AD, Pompeii was an important port town for the ancient Roman empire, which controlled the entire Mediterranean Sea. You will still see people attempting to escape and its preserved ruins of the Temples of Apollo and Jupiter, and the Forum. After the visit, lunch on your own to taste local specialities. In the afternoon excursion to Vesuvio Volcano (entrance ticket included), best known for its eruption that led to the burying and destruction of the Roman cities of Pompeii, Herculaneum, and several other settlements. Afterwards transfer back to Naples. Included: * LGBT Friendly Driver for Gaily Excursion
* AC Minibus or Car for the Excursion
* Entrance Fee – Pompeii Excavations
* Entrance Fee – Vesuvio Vulcano’s Crater 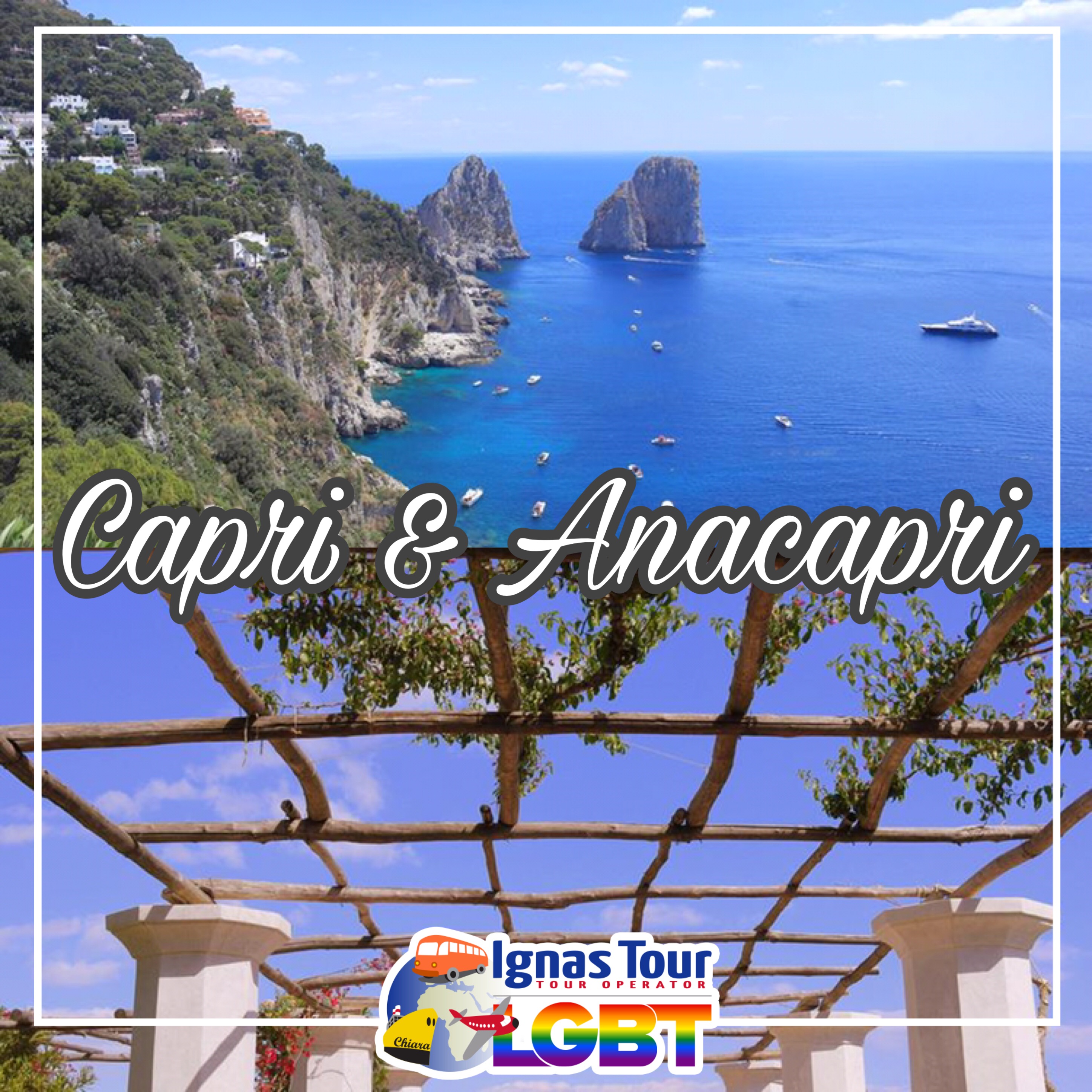 After breakfast meeting with our LGBT Friendly Tour Guide and departure Naples Harbour. Hydrofoil to Capri island, a hotspot for European gay life from the early 20th century. Private transfer to your hotel and accommodation. Start of your LGBT guided tour of the island with first stop to Anacapri where you will have the chance to visit the famous Villa San Michele and the Church of San Michele. Your tour will continue to the center of Capri, where you will have lunch on your own. Then take a walk through the famous Piazzetta where you will discover the narrow streets with its glamour boutiques, the Villa Jovis from the inside and the Augustus Gardens (entrance fee included) with a fantastic view of the Faraglioni cliffs. In the afternoon free time for individual visits and shopping. We suggest you, weather permitting, to visit the Blue Grotto. Back to Naples by ferry, dinner and overnight. Included: * LGBT Friendly Tour Guide for Gaily Excursion
* Car or Minivan on the Island (Harbour-Anacapri-Capri)
* Hydrofoil (in/return)
* Cable Railway Capri/Harbour
* Entrance Fee – Augustus Gardens 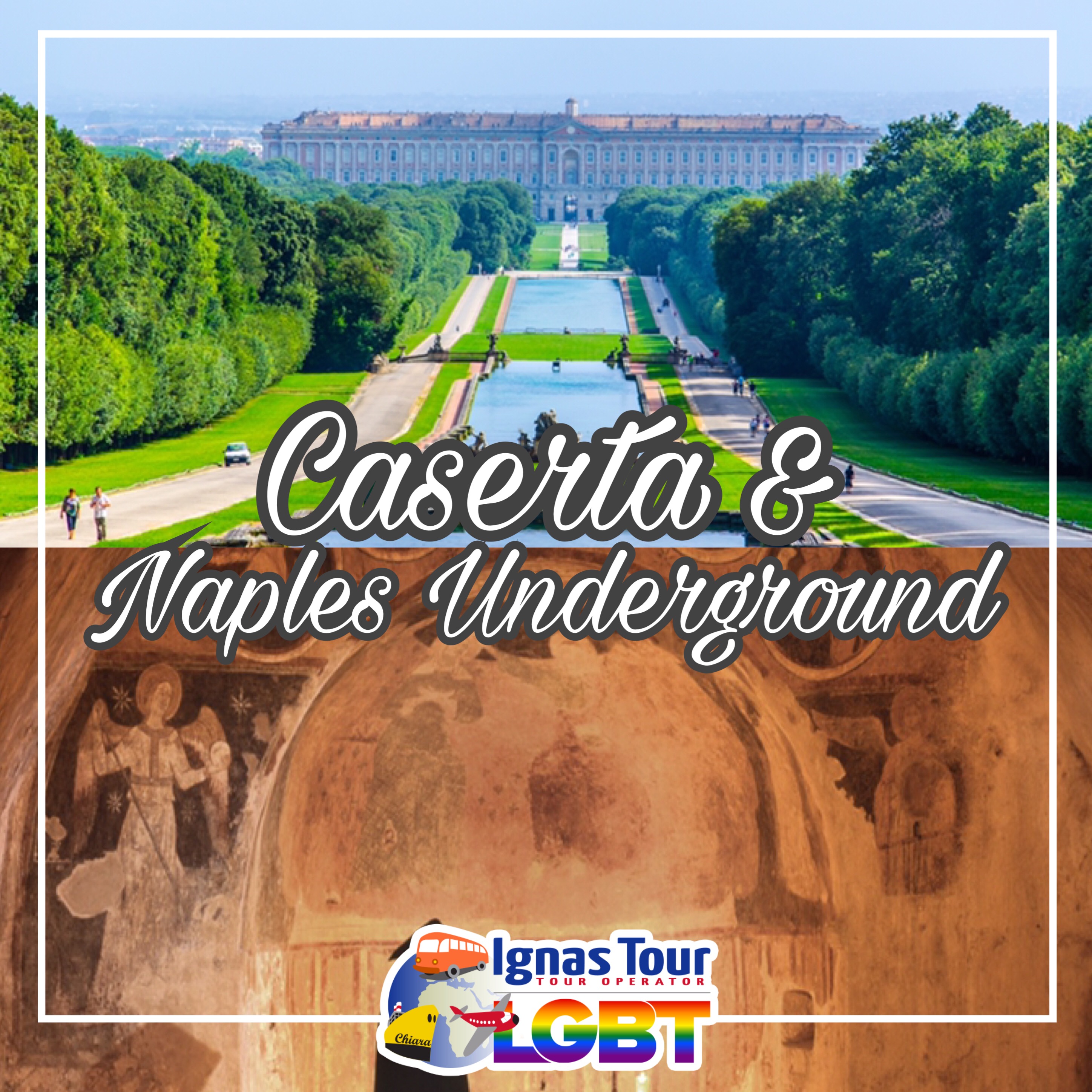 After breakfast meeting with our LGBT Friendly Driver and departure to Caserta. Welcome to the Royal Palace of Caserta, the Italian “Versailles” (entrance ticket included). It was the largest palace and one of the largest buildings erected in Europe during the 18th century. In 1997, the palace was designated a UNESCO World Heritage Site. After the visit continue to Borgo di Caserta Vecchia, the ancient old town where you can have lunch on your own. Back to Naples and visit the “Naples Underground”, a special tour 40 meters below the ground of the Historic Center of Naples, where you will see a different world, unexplored, isolated by time, but deeply connected with the world above. It’s the heart of Naples, and the place from which the city was born. The tour includes the Greek-Roman Aqueduct and many other special underground place of Naples. After the visit end of the tour. Included: * LGBT Friendly Driver for Gaily Excursion
* AC Minibus or Car for the Excursion
* Entrance Fee - Caserta Royal Palace & Park
* Entrance Fee & Tour – Naples Underground