ABOUT THE CITY...
Gallipoli has become nowadays of the most attractive and beautiful LGBT destination in Italy. Enjoy an unforgivable experience in one of the most famous openair pubs along the seaside. This beautiful town in the center of the Salento nightlife, Gallipoli, has also been known for some years by the name of Gaypolis. Because here there are not only white beaches, breathtaking landscapes and excellent gastronomy, but also transgressive theme nights and openly gay clubs where you can meet people of all kinds and for all tastes. The Salento Gay Club specializes in recommending accommodation facilities (numerous in the area of the Porto Selvaggio nature reserve), gay-friendly clubs and beaches, such as Makò Beach, among the liveliest establishments. The hottest night is GayDay, which periodically fills the slopes of the best nightclubs in the province of Lecce. 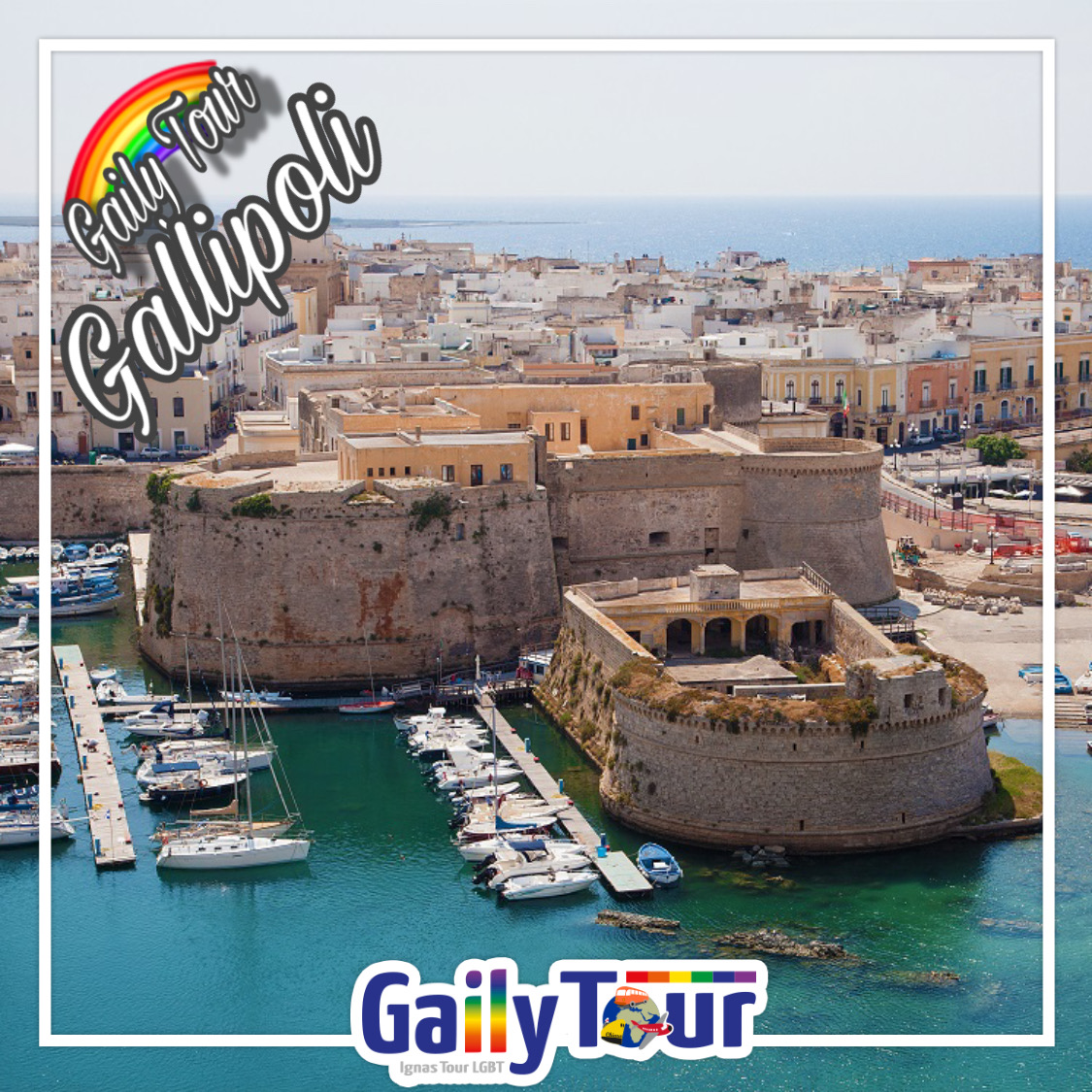 GAILY TOURS in GALLIPOLI Get ready for special tours in this amazing city !
Meet our Gay/Lesbian Tour Guide for a private walking tour of Gallipoli and experience one of the most tasty cities in the world.

Gallipoli • Gay Friendly Tour & Gaypolis’ Secrets
Be ready for an extraordinary walking tour in Gallipoli with our Gay/Lesbian Friendly Tour Guide. Gallipoli lies partly on an a little isle, which is its oldest nucleus, and partly on a peninsula, which stretches out over the Ionian Sea, extending along the road that leads to Alezio, up to the port. Gallipoli is a happy union of old and new, of tradition and modernity, summarized in that huge, modern glass building that dominates the port and the ancient center and which has become, in recent decades, the symbol of this splendid town. Admire the monuments of historical and artistic interest that are in our itinerary are: the walls, the brotherhoods churches of Purità and Santa Maria degli Angeli, the church of San Francesco facing the island of Sant'Andrea, the cathedral dedicated to Sant'Agata, the ancient greek fountain. The itinerary starts from the ancient fountain and continues through the historic center, crossing the stone bridge that connects the "Borgo" (the newest town) to the old city. During the path, you will see the "Rivellino" and the towers of the castle, you will cross the fish market and along the suggestive alleys of the ancient center overlooked by beautiful palaces and humble fishermen's houses, you will reach the Cathedral. The Cathedral, dedicated to Saint Agatha, is a true picture gallery with paintings by Coppola, Luca Giordano, Malinconico and other painters of the 17th century of the Neapolitan school. After visiting the Cathedral, we go to the church of San Francesco through a courtyard house, and along the walls we visit the brotherhood churches including the one dedicated to "Santa Maria degli Angeli" and the one dedicated to the "Madonna della Purità". During the tour learn more about the LGBT history of the city and its importance as Gay Destination for Puglia Region.
Included:
* Gay or Lesbian Tour Guide for City Tour (3 hours)
* Entrance Fee - Hypogeum Oil Mill

Gallipoli by Night • Gay Tour
Enjoy an enlightened Gallipoli and an amazing walking tour through Gallipoli's gay & lesbian bars and clubs to live on your skin the magic atmosphere and LGBT scene of the city. Enjoy your included drink (also alcohol free drink available) and own the night !
Included:
* Gay or Lesbian Tour Guide for Night Tour (2 hours)
* Aperitif in Gay Bar (1 Drink)

GAILY EXCURSIONS from GALLIPOLI
Get ready for a special full day Gaily Excursion with us !