Starting from € 25
Highlights Get ready for a special Gaily Tours & Gaily Excursions !

ABOUT THE CITY...
Colonia Pietas Iulia Pola, name given to Pula by the old Romans, has been writing its history for 3000 years. The city built at the end of a beautiful bay and on seven hills reveals many lovely and interesting stories. Today the city lives in many colours and sounds, perfectly interlacing the variegated exciting past with modern times of its inhabitants and visitors.​ 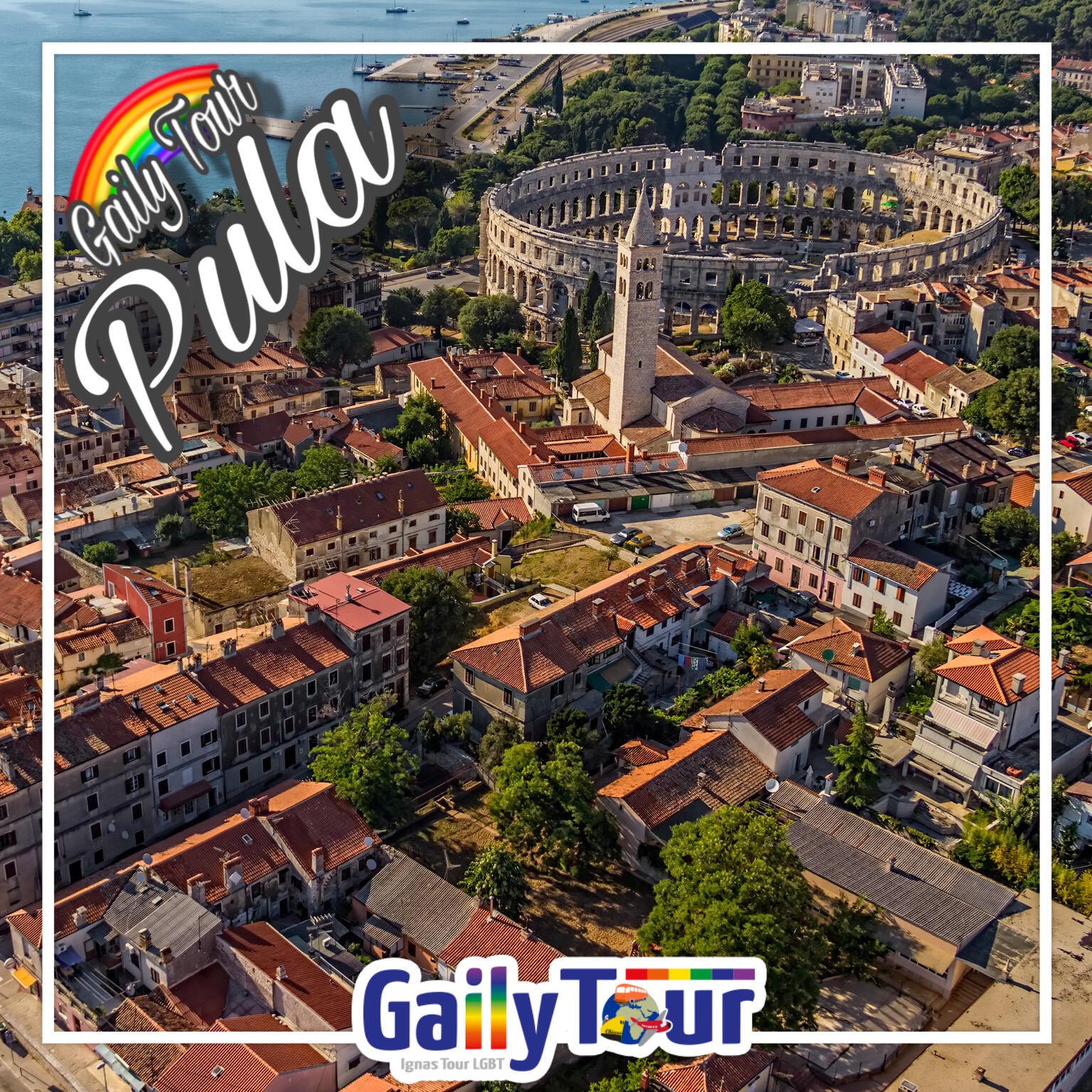 GAILY TOURS in PULA
Get ready for special tours in this amazing city !
Meet our Gay/Lesbian Tour Guide for a private walking tour of Pula and experience one of the most unspoiled cities in the world.

Pula • Gay Friendly Tour & Old Town's Secrets
Pula - glorious in roman times, but then forgotten for almost 1500 years, is marking its comeback to the world scene of historic towns. If there is one place in Croatia with roman monuments that you would want to  visit- would have to be Pula. In Croatia, there is one single roman amphitheater/colosseum still standing and that is the one that we call "Arena", located at the beginning of down-town Pula. All of the outside arches (the full circle) are original from the end of the 1st century AD. We will visit the exterior as well as the interior of the structure, explain why it was built exactly here, how it all worked out and especially its purpose. From gladiator fights, animals, war victory celebrations to Christians being sacrificed, the Amphitheater was the center of life in Roman times. The substructure tunnels are still visible today. Next, we continue our journey through history and admire the three Roman gates that would have been the main entrances into roman Pula 2000 years ago (Double Gate, Hercules's Arch as well as the Sergi/Golden  Gate). From the Golden Gate Square, we proceed to the local farmers' market- it is authentic as it caters for  most of the 60000 inhabitants that Pula has today: most of the sellers are locals from  the villages in the surrounding areas. We continue the tour walking through the Sergi Arch, passed the statue of James Joyce who lived here and taught English for a while in the last century. Dirce's mosaics, the floor of a long disappeared roman villa, are not easy to find, but pay off with their beauty. Discovered only after the WW2 bombings, they tell us about the wealth of Pula in Roman times. Finally, the Sergi street takes us to the Forum where we finish our tour. Augustus, Emperor and God, had a temple erected here literally two thousand years ago- it is the symbol of Pula today and the square in front of it is the place where people meet. The adjacent City Hall is a mixture of styles and worth a stop.
Included:
* Gay or Lesbian Friendly Tour Guide for City Tour (3 hours)
* Entrance Fee – Colosseum/Amphitheater Complex & Museum

GAILY EXCURSIONS from PULA
Get ready for a special full day Gaily Excursion with us !